This was an unusual Rouge-Robaix for me.  Rather than rushing up to St. Francisville in the wee hours of Sunday morning on the first day of Daylight Savings Time, I instead got to go up with the Tulane team, courtesy of one of their sponsors, on Saturday.  After first getting completely off track following the mapping software's directions to the Greenwood Plantation, we switched to plan B and headed back to St. Francisville to pick up our packets, eventually meeting the rest of the group at The Magnolia restaurant.  It was already pretty late by the time we got to our rooms at the bed and breakfast. Waiting in the office's mailbox were two envelopes, one with my name on it and the other with Kenny's name on it.  We asked Ben who was supposed to be in the second room, and it took us a while to figure out that he was telling us that we each had our own private rooms.  We looked at each other in disbelief, since that sort of thing does not normally happen with bike race travel. 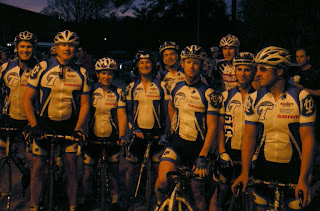 We were up in the dark Sunday morning for a 5:30 am breakfast and a half-hour drive to the start of the race. It was still quite dark when we arrived around 6:30.  The Tulane riders were doing the Gran Fondo that started at 7 am, so once they were off I had a good hour to get my own act together for the 8:30 start of the Masters race.  I would be riding my old Orbea since it had a 27 tooth cog that I was pretty sure I'd want to have, and I wasn't up to buying a new Campi cassette for this race. Although it seemed to me that a lot of riders had been training quite seriously for this race, I was definitely not one of them.  The Masters race had 66 riders registered, although probably only about 60 that actually started.  The big nervous group squeezed onto the narrow country roads as I focused mainly on staying upright and out of trouble. The first of the four gravel sections this year would come at about 18 miles.  The speed was fairly slow, which kept the group all bunched up, and made it hard to move around.  Eventually I managed to get a little closer to the front and could see Woody and Frank doing the same.  Then came a sharp right turn onto the first gravel road where some riders ahead of me immediately lost it and I had to put a foot down just to get around the mess. The rocks on this section seemed huge and the front of the group was already way down the road.  I was really struggling on this section and it wasn't until we were nearly at the end of it about three miles later that I started feeling more comfortable.  By then I think a break was probably already off the front and long gone.  I came out of the gravel with a nice sized group and we could see another group maybe 40 seconds to a minute up the road.  It took a while to get organized but we eventually got going, but we were still about ten seconds behind them when we hit the second gravel road at 25 miles.  I don't know exactly what happened there, but I ended up alone for much of it.  By the time I got back to asphalt at 33 miles it was just Scott Gurganus and myself.  We could see a few riders ahead, but nothing much behind.  I knew our race was essentially over, so we settled in to a moderate pace.  I had seen Woody on the side of the gravel road with a flat, so this whole time I was hoping and expecting to see him come up behind us, but we never saw him again.  Apparently he had multiple flats.  Anyway, we were almost to Woodville when a sizable group of fifteen or twenty masters caught up to us. 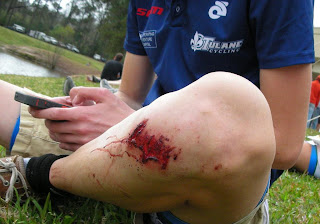 So now I was in a group of about twenty that was rolling along toward the third gravel section at a fairly moderate pace.  I think they all knew that the real race was already fifteen minutes up the road so there was really no sense of urgency which I guess explains why our final time was 20-30 minutes slower than the leaders.  At one point along this stretch there was a dead armadillo in the middle of the road.  I was second or third wheel at the time and remember that two of us pointed to it and I think said something too.  Unfortunately, somewhere toward the back of the group two riders went down. I never heard the crash, just a loud "bang" that I figured was just someone's tire blowing out.  We were nearing the turn onto the last gravel section so it wasn't a good time to sit up and look back.  One of the riders who went down was Scott.  A bit before the turn Jayson took off alone (I think), without much reaction from the rest of the group.  After the turn there is a bit of broken up asphalt and a very sketchy little bridge with big gaps between the boards.  Somehow my rear tire slipped into one of the cracks and I almost went down.  Then we hit the long Blockhouse climb up to the Pond Store.  As usual, my front wheel washed out somewhere along the way and I had to walk for a while before I could get going again.  In all, I think was off and on the bike five times during this three mile stretch, including the sand pit at the bottom of the second downhill.  I can't imagine how anyone could have ridden through that.  Anyway, pretty much everything after that section is a blur as I was rapidly approaching zombie rider mode.  I came off the third gravel section more or less alone and motored along solo for a long time before other riders started to catch up or get caught.  Eventually we had a little group again but nobody was really pushing it. 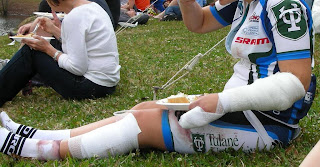 The fourth and last gravel section was at 82 miles and by then my legs were pretty much toast.  I think everyone in my little group walked part of the way up the steepest section.  I was actually having good success getting back on the bike in uphill spots where there was some traction, but as usual everything blew apart over this stretch with individual riders scattered all along the road. I was starting to feel some minor leg cramps.  After coming off of the last gravel section there are another 25 miles that feature some of the worst excuses for asphalt you'll ever find, plus an increasingly brutal headwind.  We eventually accumulated about six riders along this stretch, most of whom were on their last legs, myself included.  This section of the course seems to go on forever, throwing in some steep little climbs and switching from acceptable to horrible road surfaces. Over the last ten miles or so one rider went to the front and held a steady pace, but we were starting to lose riders to cramps the closer we got.  By this point I was probably looking at my computer every thirty seconds hoping to see the mileage getting closer to 104.  I ended up sitting on the wheel of that one guy for the rest of the way in, finishing a good thirty minutes off what would be an acceptable pace for this race. I thought at first I could attribute the slow time to the additional gravel section and the wind, but looking at the times of the lead riders in most of the races, I really can't.  The Pro/1/2 winner's time was 4:23 this year, and the Master's race winner's time was 4:59.  Mine was 5:36!  That's a huge difference. 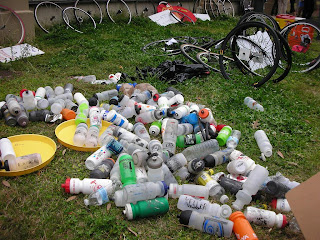 The Tulane rides, despite the fact that they were not doing the actual "race" managed to accumulate a number of crashes and injuries, including a trip to the hospital for Charlotte.  Overall, there seemed to be more crashes and flats than ever this year, but at least the temperature was comfortably warm.  Despite my relatively slow speed, my legs were absolutely trashed by the end and were sore enough to wake me up a couple of times last night.  When I got up this morning to find it raining, I was more than happy to take that as a valid excuse to skip even the easy recovery ride I'd been planning.  My NOBC teammates didn't fare too well eigher this year.  Chuck's derailleur broke in two before the start so he never even got to ride. Adrian finished around mid-pack in the Cat. 3/4 race with Fred quite a bit farther back.  Robert Monahan DNF'd.  New club member Sudan Robinson, however, finished quite well in the Cat. 4/5 race. Dennis D. finished the Masters race intact and Mignon rode well in the Women's race finishing with a group that included Allie, Louise and Stacey.
Posted by Randall at 11:43 AM

Finished intact is about it. I did well thru the first gravel section, staying upright and coming out ok but chasing the group you were in. I almost caught back on flying down from the gravel onto asphalt @ 40mph, but could not power my way back up. Found out why after the race, my rear brake came loose somewhere and it was dragging on one side of the wheel, thought it was just me getting old!
Dennis